March of 2016 has been an enormous success for equity REIT stocks. In total, equity REIT stocks rose by 9 percent in value, which comes as welcome news after the unpleasant seesawing of recent times. However, it is important to note that like always, some equity REITs have benefited more from the surge than others. For example, Manufactured Homes managed no more than 5.6 percent, whereas Timber managed a much more respectable 16 percent.

Regardless, two top performers were Ashford Hospitality Prime and CorEnergy Infrastructure Trust, which have long been popular choices for speculative investors because of their volatile prices. In brief, CorEnergy managed to claim the top position with an astonishing rate of return of 52 percent, which was fueled by two hectic weeks of activity after it released its 10-k in the middle of March. However, the reasons behind the rapid increase remain unclear at the moment. After all, although CorEnergy’s dividend yield remains one of the highest in its field at 15 percent, the performances of its biggest clients, Ultra Petroleum and Energy XXI, remain lackluster because oil prices remain low.

Likewise, Ashford Prime’s stock prices have seen enormous increases in spite of somewhat mixed circumstances. On the one hand, its stock is currently trading at 6 times its AFFO compared to 5 times its AFFO not so long ago, which is still low enough to permit room for further increases in the stock price. On the other hand, it is currently caught up in a struggle between its current external leadership led by Montgomery J. Bennett and Sessa Capital led by John Petry.

In short, the struggle has revolved around governance issues, including a $100+ million termination fee that Bennett has imposed on Ashford Prime in case its shareholders choose to remove its current team of advisors, though this is but one of the concerns that have been brought up by Petry. To correct these problems, Petry wants to bring in new directors to replace the current directors, which will be decided by the shareholders in the annual meeting.

Currently, investor uncertainty regarding the future of Ashford Prime is undoubtedly keeping its stock prices low, particularly since Sessa Capital has little experience as an activist. As a result, it remains to be seen whether the REIT stock can continue rising higher for the foreseeable future.

Following the recent dividend reduction by NorthStar Realty Finance, CorEnergy Infrastructure Trust (CORR) has become our highest yielding stock among equity REITs, with a whopping rate of 20%. This could be a dividend investor’s dream–except for the fact that CORR is also one of the most volatile REITs. CorEnergy may have had a good dividend record over the past six years for distributing similar or increasing dividends; but right now, the truth is that they have been highly speculative.

CEO David Schulte has been trying hard to dissociate CORR’s stock from the energy markets’ volatility. He has focused on the importance of the company’s assets in order to help the tenants run their operations. He mentioned that the company’s properties are part of the tenants’ essential operations and rent payments are not an expensive portion of their operating expenses. Also, although the company has participating rents in the tenants’ operations, he emphasized that CORR receives the rent payments before debt and equity service. That is, from the tenants’ standpoint, a priority for them to keep paying CorEnergy. 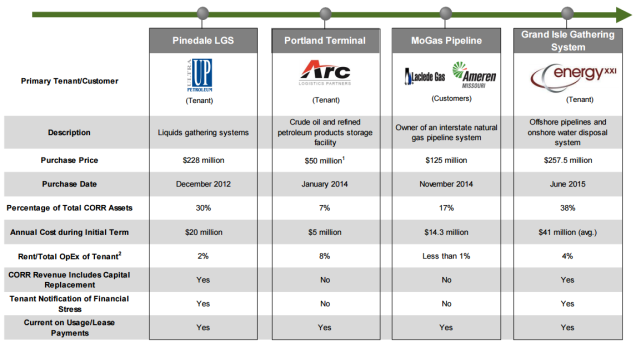 The company went further and disclosed this early March, that major tenants have been compliant with their lease contracts, despite their liquidity concerns. Their three major tenants: Ultra Petroleum Corp (UPL), Energy XXI Ltd (EXXI), and Arc Logistics Partners LP have all paid on time. In a recent presentation, the company provided precise examples of where the rents stand on both UPL’s and EXXI’s income statements. See Below.

Although I have no doubt that Pinedale lease agreement should be important for UPL’s operations, the concerns about UPL go deeper. The company is in a vulnerable position and is struggling to be a going concern. It has to either be able to comply with financials covenants or renegotiate them. Since oil and natural gas prices have not shown material improvement, it has been trying the latter. If UPL doesn’t successfully meet payments, it may file for Chapter 11 or a creditor may file for Chapter 11 for it. This does not exclude the possibility of renegotiating lease rates.

EXXI has been in the same boat as UPL and has already mentioned that filing under Chapter 11 may be unavoidable. EXXI revenues have significantly diminished quarter after quarter. Last month, the company decided not to pay $8.8 million in interest payments and entered into a 30-day grace period. They made the payment eventually, but entered into a new 30-day grace period for another payment due on March 15, 2016, which may lead it to a default.

The stock performance for both UPL and EXXI have been dire. Today they are a small percentage of their 52-week high, putting them into the category of deeply distressed stocks. Last month, the EXXI share price was so low (below $1.00 for 30 days in a row) that NASDAQ informed EXXI that they have to regain minimum bid price or delist the company. As Richard Zeits mentioned in his Seeking Alpha article, investing in EXXI resembles one of a lottery situation. The difference is that in the lottery you know the amount and the timing; in this near-default stock’s case, you don’t.

In summary, aware of the tenants’ severe distress situation, it is hard to buy or hold CorEnergy, except for speculative purposes. Despite their dividend record, to say they have not been an ideal stock for dividend investors is a euphemism.

CorEnergy Infrastructure Trust has drawn much attention lately because it has seen sharp ups and downs in the financial markets. It would go from worst performing stock a week to best performing the next. Over the past six months the stock has fallen by almost 50%, leading to an AFFO multiple of 4.4x and a dividend yield of 19%. The truth is that it is never comforting when investors start discussing the repercussions of a potential bankruptcy of its main tenants.

The risks of CorEnergy are in the same bracket as NorthStar Realty Finance and the Ashfords REITs, which have been target of activists. The risks are high, but the rewards are potentially very lucrative. But, since CorEnergy’s assets appear shaky, the chances of activists coming to give their share price a boost looks low.

Concentration is one thing that turns a lot of potential investors off, and it also contributes to share price discounts. CorEnergy has three leases, but half of its 2015 lease revenues came from one tenant, Ultra Petroleum Corp. Ultra Petroleum operates in Pinedale, Wyoming and is in the natural gas industry. It’s traded on the New York Stock Exchange under the ticker UPL and its share price has declined by almost 90% in the past twelve months.

When a stock like CorEnergy is volatile, I always look for signs of safety in the rental payments. Unfortunately, this rule may not apply here. CorEnergy claims that rental payments make up a tiny percentage of Ultra Petroleum’s operating expenses; however, it’s possible that the issue here runs much deeper.

Ultra Petroleum Has Been Downgraded to CCC-

This is what S&P said in their press release:

“Our ratings on Ultra reflect our view of the company’s fair business risk, highly leveraged financial risk, and weak liquidity. The negative outlook primarily reflects our view that Ultra Petroleum will breach its leverage covenant at the end of the first quarter, and could restructure its debt or announce a distressed exchange within the next six months.”

It is clear that Ultra is vulnerable, especially considering the current energy price trends. Ultra has the option to assign its lease agreement to a third party. Given the present situation, it’s unlikely that the potential new tenant will hold a worse credit rating, so this possibility can actually work in CorEnergy’s favor. CorEnergy’s other top tenant, Energy XXI Ltd, which contributed to a third of 2015 lease revenues, holds the same S&P rating as Ultra Petroleum.

Although the tenants’ creditworthiness has been CorEnergy’s biggest headache, the company had been struggling with 2014 loans of $15 million to Black Bison Water Services, a provider of services for the disposal of flow back and produced water generated from oil and gas-producing wells. Due to reduced drilling activity in its area of operations, Black Bison has not repaid the loans. CorEnergy has agreed to forbearance twice and set aside half of the loan as bad debt.