CorEnergy Infrastructure Trust has drawn much attention lately because it has seen sharp ups and downs in the financial markets. It would go from worst performing stock a week to best performing the next. Over the past six months the stock has fallen by almost 50%, leading to an AFFO multiple of 4.4x and a dividend yield of 19%. The truth is that it is never comforting when investors start discussing the repercussions of a potential bankruptcy of its main tenants.

The risks of CorEnergy are in the same bracket as NorthStar Realty Finance and the Ashfords REITs, which have been target of activists. The risks are high, but the rewards are potentially very lucrative. But, since CorEnergy’s assets appear shaky, the chances of activists coming to give their share price a boost looks low.

Concentration is one thing that turns a lot of potential investors off, and it also contributes to share price discounts. CorEnergy has three leases, but half of its 2015 lease revenues came from one tenant, Ultra Petroleum Corp. Ultra Petroleum operates in Pinedale, Wyoming and is in the natural gas industry. It’s traded on the New York Stock Exchange under the ticker UPL and its share price has declined by almost 90% in the past twelve months. 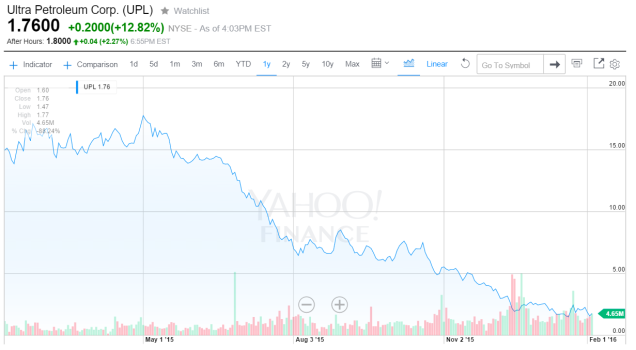 When a stock like CorEnergy is volatile, I always look for signs of safety in the rental payments. Unfortunately, this rule may not apply here. CorEnergy claims that rental payments make up a tiny percentage of Ultra Petroleum’s operating expenses; however, it’s possible that the issue here runs much deeper.

Ultra Petroleum Has Been Downgraded to CCC-

This is what S&P said in their press release:

“Our ratings on Ultra reflect our view of the company’s fair business risk, highly leveraged financial risk, and weak liquidity. The negative outlook primarily reflects our view that Ultra Petroleum will breach its leverage covenant at the end of the first quarter, and could restructure its debt or announce a distressed exchange within the next six months.”

It is clear that Ultra is vulnerable, especially considering the current energy price trends. Ultra has the option to assign its lease agreement to a third party. Given the present situation, it’s unlikely that the potential new tenant will hold a worse credit rating, so this possibility can actually work in CorEnergy’s favor. CorEnergy’s other top tenant, Energy XXI Ltd, which contributed to a third of 2015 lease revenues, holds the same S&P rating as Ultra Petroleum.

Although the tenants’ creditworthiness has been CorEnergy’s biggest headache, the company had been struggling with 2014 loans of $15 million to Black Bison Water Services, a provider of services for the disposal of flow back and produced water generated from oil and gas-producing wells. Due to reduced drilling activity in its area of operations, Black Bison has not repaid the loans. CorEnergy has agreed to forbearance twice and set aside half of the loan as bad debt.