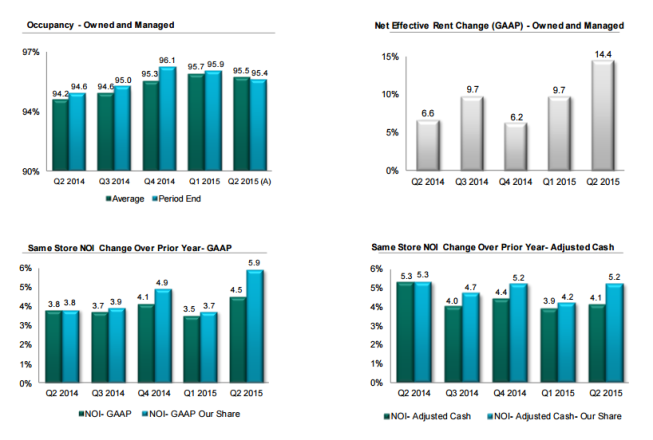 Prologis Industrial (NYSE:PLD), my favorite industrial REIT for Q1 2015, remains on fire in the second quarter of 2015, and management has said that this year is shaping up to be one of the strongest in its history. With a 5.2 percent cash same-property NOI, the company has capitalized in the rent recovery cycle. Rental rates on signed leases increased 14.4 percent, led by the US (which increased 22 percent) — a record-breaking number for that company!

Absorption remains strong. Besides higher rental rates, occupancy advanced 80 basis points in Q2 2015 over Q1 2014, although there was a slight quarter-over-quarter drop. Management foresees no slowdown this year and expects supply and demand to reach equilibrium in 2017.

Debt level increased due to the KTR transaction, but Prologis managed to capitalize on its size and access to foreign markets and be granted favorable conditions. Debt-to-capitalization increased from 30 percent to almost 40 percent from Q1 to Q2 2015 because of that and the share-price decrease.

Stronger FFO, which grew 9 percent this quarter over the past year, and the share price have put price-to-FFO at 19.4× — below the 21× historic norm — putting its target price between $43 and $44. Since the peak for the past 52 weeks was $47.56, it is not unreasonable to expect to get up there. Share price increased 1.7 percent to $40.31 following the market announcement.