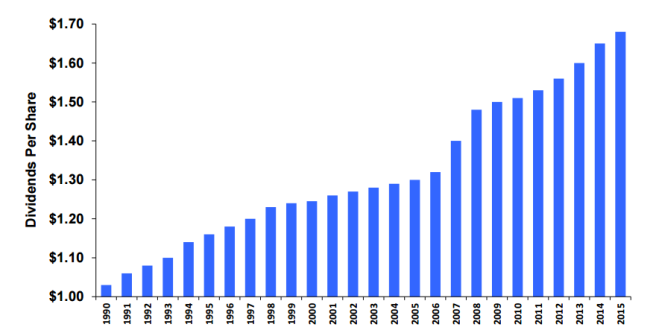 After raising dividends for 25 consecutive years, National Retail Properties (NYSE:NNN) did so again this year. Dividends increased almost 4 percent to $0.435 per share, with a forward dividend yield of 4.7 percent. NNN is one of the few REITs that claim such a long-standing track record. Even during the Great Recession, when FFO declined and dividend was not covered, the company has maintained its power. Not even the market favorite Realty Income has this history: It has 22 years of continuous dividend increases.

NNN’s secret for being outstanding also lies in its diversified portfolio, with long-term net lease contracts. The company sports over 2,100 properties located throughout the country. In addition, NNN is part of retail, whose growth rates over the past few years have been phenomenal. Its share price has increased 73 percent since the end of 2009. Just as an example, Free Standing Retail subsector peer Realty Income’s share price has increased 80 percent.

The company will soon release its second-quarter results. The last time we looked at their quarterly results — the past May — they were very good. NNN topped our ranking of select net lease REITs, with higher AFFO growth and occupancy rates, and lower leverage, than its peers. NOI growth was fairly good too; however, the company’s dividend rates were not particularly high. In fact, other than American Realty Capital Properties, which suspended its distributions, NNN has a lower dividend yield than its closest retail peers, which have a 5.1 percent median yield.

As with most of the REITs, NNN’s stock performance struggled and dropped by 11 percent during the first half of 2015. The freestanding retail subsector  in aggregate decreased, on average, by the same proportion. Today, its price-to-FFO is 17.2 — nearly the same as Realty Income and above the peer median. Being a blue chip truly costs the investor extra dollars.