Federal Realty Investment Trust (NYSE:FRT) is a long-running street-shopping REIT that was established in 1962 and whose dividends have been increasing since 1967. The company has deployed capital in defensive real estate on both coasts in densely-populated locations where the barriers to entry are high. Any individual or business that invested in retail made a gain as the recession came to an end, and Federal Realty was no exception. Share prices doubled from New Year’s Eve of 2010, attaining the highest valuation levels and the lowest dividend yields among shopping center REITs.

Among the most coveted projects has been the Assembly Row in Somerville, Massachusetts, which demonstrates the way Federal Realty carries itself. After opening its initial phase, the company announced recently this mixed-use development is advancing to the second. Rather than conduct the whole construction process, they have been awaiting the results of the first phase, which management says has been widely accepted. Demand has also surpassed supply. 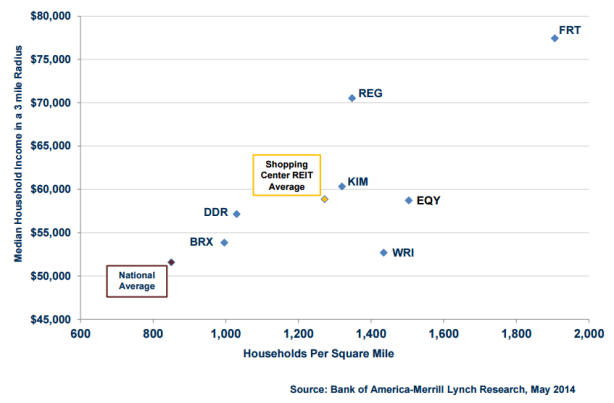 Leased up to nearly 96 percent, with occupancy not dropping below 92 percent, Federal Realty has been able to develop Assembly Row because of the recession and changes in consumer behavior and demographics. The recession has been very effective in destroying paradigms, making retail more creative and open to other possibilities. On the one hand, online businesses have caused people to become more impatient and demand efficiency and proximity to places; on the other hand, they increased the need to re-socialize and experiment more with health clubs, entertainment, shopping and the environment.

Federal Realty is planning to double its NOI over a ten-year period. They have been looking inwards when it comes to growth plans, which cover same-center portfolios and portfolio growth from redevelopment and (current and future) mixed-use investment. They have not discarded growth through property acquisitions. The company has also been making its debt profile more conservative, with debt tenure averaging ten years.

From a valuation perspective, Federal Realty has been relatively the most expensive shopping center REIT, trading at a 26.1x price-to-FFO and a 2.6 percent dividend yield. Stocks are still comparatively resilient even after the sector underperformed overall in the first half of 2015. Share prices decreased by four percent, the second-best performance among shopping center REITs.

What does management have to say about FRT stock being perceived as expensive? That is just what they want. It appears that the valuation will not pull back in the short term.