Essex Property Trust (NYSE: ESS) is taking advantage of the imbalance between supply and demand all over the West Coast, which has been favorable to them. Geography — focused on the West Coast — differentiates the company from its peers.

Essex Property Trust owned, or at least had ownership interest in, at least 240 apartment communities in coastal markets, whose units total about 60,000 and are located in major urban areas such as Los Angeles, San Diego, San Francisco and Seattle — markets where the demand exceeds the supply, fueled by an increase in income and employment. They have 82 and 18% of their NOI in California and Washington respectively.

Year-over-year numbers for the last two quarters have been phenomenal. For 2014 Q4 same-property NOI and revenue grew 10 and 8 percent respectively. For 2015 Q1 same-property NOI and revenue went up 11 and 8 percent respectively. In the near and mid-terms, some moderation in growth rates has been expected, although the operational figures for Q1 2015 have been strong, performing better than those of other apartment REITs. 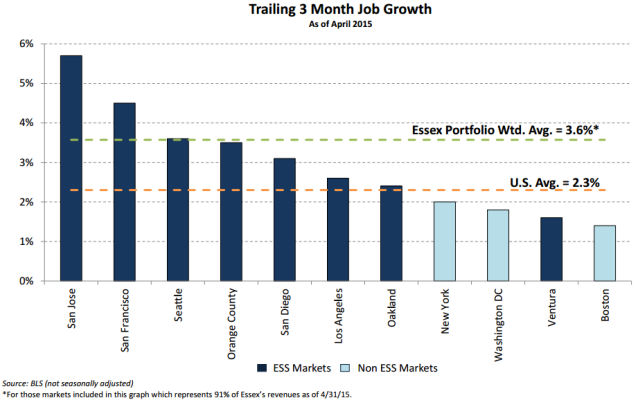 The cap rates for acquisitions have decreased, and management is talking about those for the best properties around 4 percent, although they said there is little activity for A & B locations.

What we have said about the property levels ties in with stock levels. Valuation metrics for Essex’s properties have been the highest among apartment REITs. Price-to-FFO has been 24.5×, compared with 21× for the peer median. Essex trades at a 2.6 percent dividend yield since the peer median is at 3.1 percent.