DuPont Fabros Technology’s new CEO Christopher Eldredge has had his hands full since he took over the position on February 17. After the February 5th announcement that the default of DuPont Fabros’s seventh-largest customer would impair the company’s 2015 results, share price dropped 16 percent over the following several days. Although some of this loss has already been recovered (as of 20 March 2015, the price is down only six percent since the announcement), Mr. Eldredge has a winding road ahead of him this year if he wants to show investors that he can put the company’s growth back on track.

On the surface, DuPont Fabros looks like an attractive choice, worth a drill-down report. The company IPOed on 24 October 2007, so it has a respectable history.

DuPont Fabros’s dividend history goes back to 2008, when it was interrupted four quarters in a row before getting back on track in the fourth quarter of 2009. Concerns about liquidity led the company to preserve cash and limit cash distributions to only 10 percent of its 2009 AFFO. On December 31, 2008, debt was 83 percent of total market capitalization, 55 percent of which matured in 2009 and 2010.

Since then, the liquidity issue has faded and no additional dividend interruptions have occurred. In fact, dividends have displayed a compounded annual growth rate of 78 percent between 2009 and 2014.

Funds from operations have consistently increased since 2009, except for a drop in 2012 from which the company was able to recover the following year. The compounded annual growth rate between 2009 and 2014 was 22 percent. 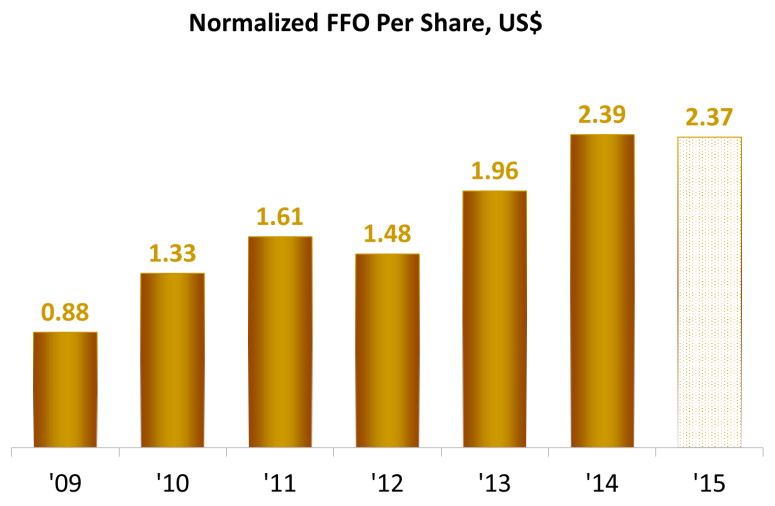 Additionally, AFFO has not shown any issues between 2009 and 2014, growing swiftly at a CAGR of 26 percent.

Annual revenue growth has gradually decreased from 22 percent in 2010 to 11 percent in 2014. CAGR between 2009 and 2014 was 16 percent. Interestingly, the company has been able to consistently add US$ 43-44 million in revenues year after year, but this pattern will be harder to maintain in 2015.

Per the FAST Graphs chart below, the current price-to-FFO of 14.5 (black line) has been slightly under DuPont Fabros’s all-history average of 14.8 (blue line), indicating no significant share mispricing. The recent price rebound seemed to be an appropriate correction. 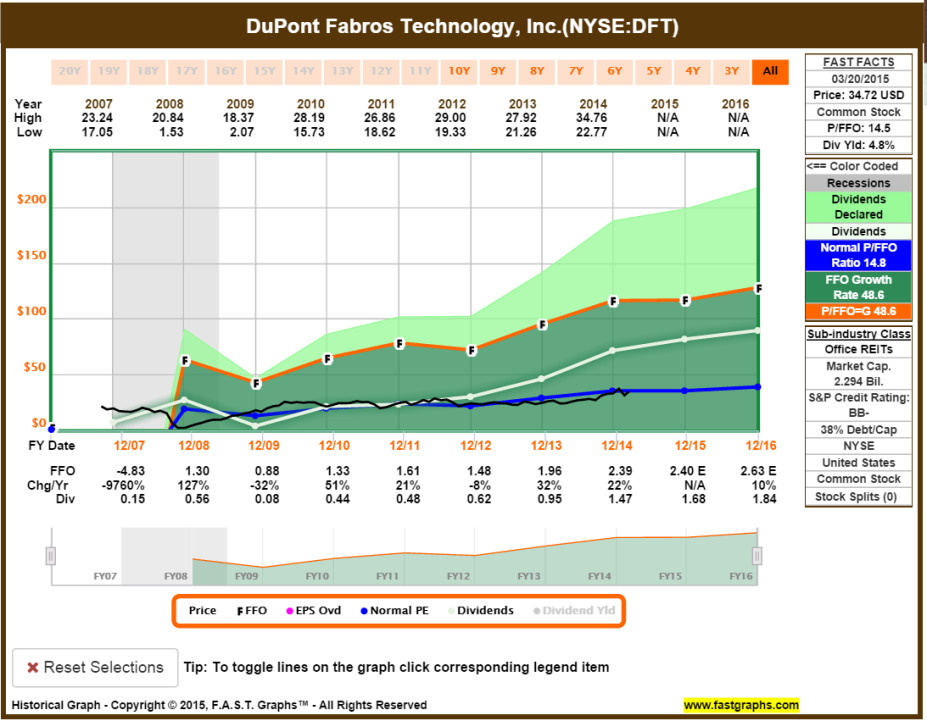 This past February 5 during the Q4 2014 earnings call, DuPont Fabros senior management signaled that both Normalized FFO and AFFO per share for 2015 would not grow. In fact, 2015 result could even decline by $0.10 per share from the 2014 result.

Among other things, DuPont Fabros has conditioned a better performance of 2015 Normalized FFO to the financial performance of Net Data Centers, a top-seven customer that filed a voluntary petition for relief under chapter 11 on February 23, 2015. Responsible for approximately 3.5 percent of DuPont Fabros’s annualized base rent ($0.16 per share in revenues), Net Data Centers halted any 2015 base rent payments. As such, any revenue received from Net Data Centers will increase the 2015 Normalized FFO guidance.

Events like the one involving Net Data Centers remind investors that a high customer base concentration has been a vulnerable spot for DuPont Fabros. The failure of a single customer has greatly diminished its ability to continue growing in 2015.

The other challenge will be to lease a portion of Yahoo!’s space, which will expire on September 30, 2015. Fortunately, Yahoo! will vacate the space long before that so DuPont Fabros will have time to market it to new customers. If the company does not find anyone by September 30, 2015, normalized FFO will decline by $0.05 per share per quarter.

One of the main concerns about DuPont Fabros is the low number of customers and high rate of concentration. The company has more than 100 lease expiration dates from only 38 customers, and the top four customers (Facebook, Microsoft, Yahoo!, and Rackspace) represent 60% of annualized base rent.

Also, although DuPont Fabros’s facilities are located in popular data center regions, 65 percent of its net leasable square footage is concentrated in Virginia, and the remainder is in California, Illinois, and New Jersey.

Nonetheless, lease expiration profile is not an imminent risk. The company has pretty much secured an average six years of triple net leases with full expense recovery. The only thing that caught my attention was that 40 percent of annualized base rent will expire within four years. However, this is not nearly as concerning as it is for DuPont Fabros’s peers – for CyrusOne, QTS Realty, and CoreSite, more than 40 percent of annualized base will expire by 2016.

Another concern is that DuPont Fabros has a good portion of floating debt (40 percent). The company has indicated that it is subject to higher interest expense due to new debt used for development, which will ultimately limit 2015 FFO results. This new debt could raise its total debt plus preferred to total market capitalization, which today is 33.6, the second-highest among DuPont Fabros’s peers. On the other hand, because it has a mid-range credit rating the company should pay reasonable rates in comparison with its peers.

Recent developments have muddied the waters, and as a result DuPont Fabros’s outlook is unclear. The company has many short-term to-do’s. It must address the Net Data Center issue and, on a less critical level, find a replacement for Yahoo!’s partial move-out. Also, it must be able to grow debt for development without compromising FFO. Finally, despite his twenty years of experience in the wholesale data center space, Mr. Eldredge has yet to demonstrate that under his stewardship the company can continue to prosper. He won’t lack help from former CEO, co-founder, and newly-appointed board member Hossein Fateh.

The good news is that the company continues to move forward, expecting the delivery of 25.1 MW by the end of the year. This will increase IT load base by 10 percent. Further, Mr. Eldredge has been tasked with putting together a strategic plan for the company and presenting it to the board and investors by the fall. He will hopefully bring to light potential new paths for the growth of the company – new markets to prospect, ideas for marketing the recently-launched mini-wholesale product for possible retail customers, and additional add-on services.

Ultimately, the numbers speak volumes, and I still see a reasonably priced stock with sub-par short-term growth prospects in revenue, FFO, AFFO and quarterly dividend. Mr. Eldredge will have to get these waters clear first.

Note from the author: All tables and graphs (except for FAST Graphs) have been processed and put together by the author using sources believed to be reliable.

Did you enjoy our newsletter? Subscribe and receive for free our biweekly newsletter in your inbox. We won’t sell your email address to third parties. It’s our privacy policy!

Disclaimer This newsletter is not engaged in rendering tax, accounting, or other professional advice through this publication. No statement in this issue is to be construed as a recommendation to buy or sell any security or other investment. Please do your own due diligence before making any investment decision. Some information presented in this publication has been obtained from third-party sources considered to be reliable. Sources are not required to make representations as to the accuracy of the information, however, and consequently the publisher cannot guarantee accuracy. Disclosure The author has no positions in any shares mentioned, and no plans to initiate any positions within the next 72 hours.​